What is a “Reasonable” critical habitat for frogs?

The Louisiana future of the dusky gopher frog — a small, reclusive amphibian that hasn’t been seen in the state in 50 years — is in the hands of the eight sitting justices of the U.S. Supreme Court.

On Monday, the justices heard arguments in a case that arose in 2012 after the U.S. Fish and Wildlife Service designated private timberland in the eastern part of St. Tammany Parish as critical habitat for the critically endangered frog.

Landowners, including timber giant Weyerhaeuser, challenged that designation in federal court. They argued that the critical habitat designation would cost them millions of dollars by restricting development. Two lower courts ruled in the government agency’s favor, setting the stage for Monday’s Supreme Court arguments.

The case is the first the court heard at the start of its new term, one complicated by the vacancy left by the retirement of Anthony Kennedy and the stalemate over the confirmation of Brett Kavanaugh. During oral arguments, the justices seemed to break down along ideological lines, with all but the notoriously reticent Clarence Thomas asking questions.

“The fact that we only had an eight-member court had a big influence,” said Jonathan Wood, an attorney for the Pacific Legal Foundation who represented Edward Poitevent, one of the landowners. Wood did not argue before the court, but he was present in the court Monday. “The fact that they don’t have a ninth justice is going to be a challenge in cases such as this one.”

The eight justices have no timetable to issue a decision in the case. If, as some expect, it is evenly split on ideological lines, the court could decide to have the case reargued after a ninth justice is seated. However, a 4-4 split will leave lower court rulings in place.

The dusky gopher frog is currently confined to a few small areas in southern Mississippi, where there is a significant effort to preserve and restore the frog population. Only a few dozen are believed to remain in the wild, but none currently live on the Louisiana land on which the case is based.

And while the Louisiana land does have seasonal ponds that the frogs require for mating, it also is populated by loblolly pines, which would need to be removed and replaced with longleaf pines for the frogs to live there.

In designating the land critical habitat, the Fish & Wildlife Service decided that the required modifications were “reasonable,” a point the justices honed in on almost immediately.

Just minutes into plaintiffs’ attorney Timothy Bishop’s presentation, Justice Elena Kagan presented a hypothetical, aimed at probing the limits on the government’s power to designate habitat that is not suitable for a species but could be made so with some modifications.

“Can the government designate that area as unoccupied, critical habitat?” she asked.

“No,” Bishop replied. In this case, he said, the required modifications would be overly burdensome.

“I don’t rule out that the government might be able to justify a critical habitat designation where there are de minimis changes when you’re really only talking about digging a few holes,” Bishop said later. “That isn’t this case.”

Other justices seemed to differ with Kagan’s premise.

“Now this case is going to be spun, we’ve already heard questions along this line, as a choice between whether the dusky gopher frog is going to become extinct or not. That’s not the choice at all,” said Justice Samuel Alito. “The question is who is going to have to pay and who should pay for the preservation of this public good?” 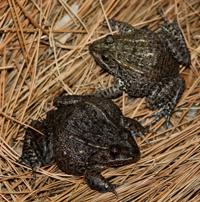 San Juan County consists of five million acres of high desert in southeastern Utah, an arid, mountainous environment where the key crops are a…

“If you have ephemeral ponds in Alaska, you could build a giant greenhouse and plant the longleaf pines and the frog could live there,” he said. “In other words, there has to be presumably some limit on what the restoration you would say is required.”

“Yes,” Kneedler replied. “What the Service found here is that restoration of the uplands could be accomplished with reasonable efforts.”

The case has drawn wide interest from around the country. Conservative legal groups, some other counties and the attorneys general of 18 states filed briefs in the court supporting the plaintiffs in the case. On the other side, conservation groups have joined in supporting the government’s position.

Collette Adkins, with the Center for Biological Diversity, refused to offer a prediction about which way the court would go. “It’s difficult to read the tea leaves,” she said.

Edward Poitevent, who is one of the owners of the land and has been the public face of the plaintiffs, said he was “cautiously optimistic” after Monday’s hearing. Plaintiffs, he said, had targeted Justice Stephen Breyer as a potential swing vote.

“But it’s hard to tell when they are going to vote with you,” he said. “you never know with these justices.”

San Juan County consists of five million acres of high desert in southeastern Utah, an arid, mountainous environment where the key crops are a…

You, no doubt, spend a lot of time fretting about the dusky gopher frog, especially since St. Tammany Parish is central to its gradual slide.